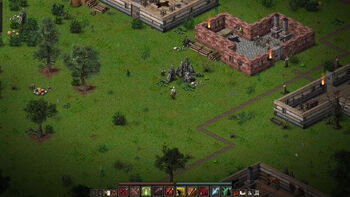 Balrum is a 2D isometric tile-based RPG for PC, Mac and Linux from Balcony Team. The game uses a totally new homegrown engine which was designed to be fast without demanding too much from the hardware. It was released on February 29, 2016.

Now that Nasrus revealed his plot, the kings of Balrum sent their armies to the borders of the unknown lands captured by Nasrus. The power of the undead armies had been greatly underestimated. No one survived the battles. Without the armies of the kings, chaos has overcome Balrum. Large bandit clans formed and started to live by their own rules. Soon the kings of Balrum had fallen. Two little villages stood up against the new bandit rulers and decided that the only way they will survive is if they hide in the Dark Woods. No one dare enter the Dark Woods and this is what the villagers took advantage of. A horrible deal has been made, but the villagers are safe for now. The undead hordes of Nasrus are still waiting at the borders, but they can march into the heart of Balrum anytime their lord commands and there is no one to stop them. The people wonder why the good gods of Balrum, Adacus and Eogor don’t seem to be interested in the events that took place.

The world is realtime in Balrum. This means that players will see NPCs and animals living their daily lifes. The living world is one of the most important feature in the game, and will include unique animations and AIs for each NPC that lives in the world. The Blacksmith creates weapons, other NPCs will sit down at home and eat, sleep, and talk, the woodcutter will actually go and chop down trees. Animals will live their lifes as well: eating, sleeping, even hunting each other.

Everything that looks to be useable in the world will be useable. There will be a vast amount of herbs and materials in Balrum. To build a home, huge amounts of materials will be required and getting those will require that players can chop down trees and mine stone.

The world is hand made. Nothing is randomly generated. Every chest will have loot that was placed by hand. But don’t gather everything hastily, because the mushroom that ia picked up one day may be more powerful the next day. Special mushrooms and other special herbs can level up in Balrum. Small details are important. For example if it starts to rain, small pools of rain will appear and who knows, players might find something in those little pools! There are lots of dungeons to explore in the world of Balrum, some of them are multiple levels deep. Every dungeon will have a master who is the boss of the given dungeon. These dungeon masters will drop carefully selected loot so that players will feel that beating the dungeon was really worth it. This will be a game that is aimed at mature players.

There will also be random events which can occur. These include: 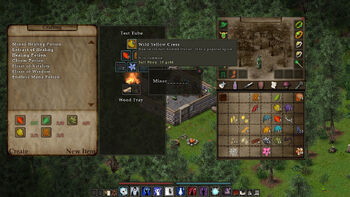 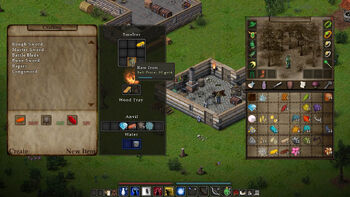 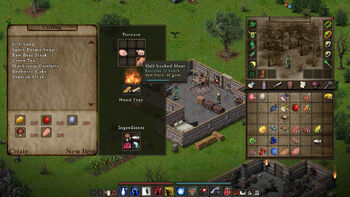 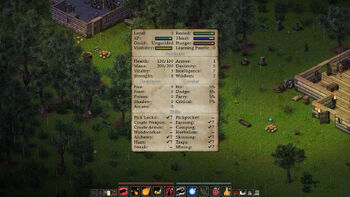 Storytelling is also an important part of the game. When players reach chapter 2 in the game, (there will be 5 chapters in the final game) they will be able to choose from 3 guilds to join. Each guild will have its own storyline that will eventually lead to the outcome of the game. There are dozens of side quests as well. Each quest will resemble a little story that has multiple ways of completing it. Through quests player characters will develop, NPCs will act differently if the player helps them or is kind to them. New dialog options will appear if the trust of the given NPC has been earned.

Players can build their own home in Balrum. In fact, in chapter 1 the player character will be asked by his/her grandfather to build a new home for the two of them because something terrible happened to their old home and it became uninhabitable. In the following chapters the PC will leave that home and be able to choose to build a home for themself that is theirs only, or not, and live a true adventurer life. There are benefits of building a house:

Houses will be upgradable with new furniture or maybe a nice trophy or hide that fits in the home nicely, and the option to redesign a house will be available at any time.

There will be NPCs around the world who can teach the player how to make weapons, or how to brew all kinds of potions, but players can also make their own custom items. The player will be able to choose the materials they would like to use and the item type, after that the game interface will reveal how long it will take to create the item and its statistics. The player will also be able to choose the icon for the new item, if the new item meets the threshold level of quality.

Survival requires food. Food can be found in the world or purchased, but it is best is to cultivate a farm! Players will be able to position their fields near their home and start growing crops. Every plant will require a different amount of time to grow. The process can be sped up by taking care of the fields, making sure that they are well hydrated and fertile and with some luck, it will rain which helps a lot too! Players will also have to protect their farm from large creatures that might trample their fields. A sturdy fence would most certainly help!

Players will also be able to hunt prey in Balrum. Sneaking up to or attacking their prey from afar. If they successfully kill their prey and know how to skin animals properly, players will be able to process the prey fully. Setting down traps will provide a chance to capture smaller animals without the need of pursuing them.

Combat in Balrum is turn based (but only combat, the world is realtime). The player will have a large selection of spells and abilities at his or her disposal. (currently 65 but hopefully 100+).

Skills are learned from masters. For example: players wanting to skin animals will have to know how to. Skills will have different levels. New levels in a given skill will be acquired through using the skill until a certain sublevel of the skill is reached, at which point the player will need to seek out a teacher to learn the next level.